When Parents Divorce, the Children Get the House

A common Sunday night ritual for children whose parents are divorced is packing up the schoolbooks and soccer cleats for the weekly trek to mom or dad’s house.

In a flip, some divorced couples are trying an approach they call nesting: Mom and Dad shuttle back and forth while the children stay in the family home.

Some couples rent separate apartments for when they are away from the family home. Other couples rent an apartment together. When money is very tight, the off-duty parent sleeps on a friend’s or relative’s sofa.

Nesting makes sense, some couples say, to give the children stability. The parents reduce the financial pain of divorce by being able to wait for the right time to sell the family home or to invest in new homes

Therapists, however, often don’t approve. They caution that the arrangement impinges on the parents’ privacy at a time they’re meant to establish their own new lives and routines. They question whether such close collaboration allows people to move on. And some question whether it is good for the children to see their separated parents still so deeply entwined.

“It takes a heroic effort,” says Ruth Zitner a therapist based in Washington, D.C. “You have to be emotionally aware and amicable. It goes beyond the children. Who washes the dishes in the sink? Who cleans rotting fruit in the fridge?”

Alan Mendelsohn, a documentary filmmaker in Toronto nested for seven years until 2011. When he and his wife discussed getting divorced, they ran through a variety of scenarios including buying a duplex apartment and getting houses next to each other.

A tight housing market in Toronto and love of the family house eventually led them to nesting. Together he and his ex rented an apartment a five-minute walk from the house. One of them would spend three weeks at home with the children, ages 12, 16 and 18, while the other went to the apartment. They shared one of the bedrooms in the family house but had separate bedrooms in the apartment. This allowed for a modicum of privacy if he was dating.

“We tried to make it best of all possible worlds,” says Mr. Mendelsohn.

The rules of the arrangement were never codified but they were clear. Handover was done on Sunday. The departing parent made sure the house was spotless: no cosmetics or shaving cream were to be left in the master bathroom; no papers on the desk in the study. The apartment was also kept clean and stocked with basics like toilet paper and salt. Thoughtfulness was what kept the arrangement working.

“It was an inconvenience,” says Mr. Mendelsohn. “I would have preferred my own place and that stability but then the kids wouldn’t have had that stability.”

The couple ended the arrangement when the children went to college. 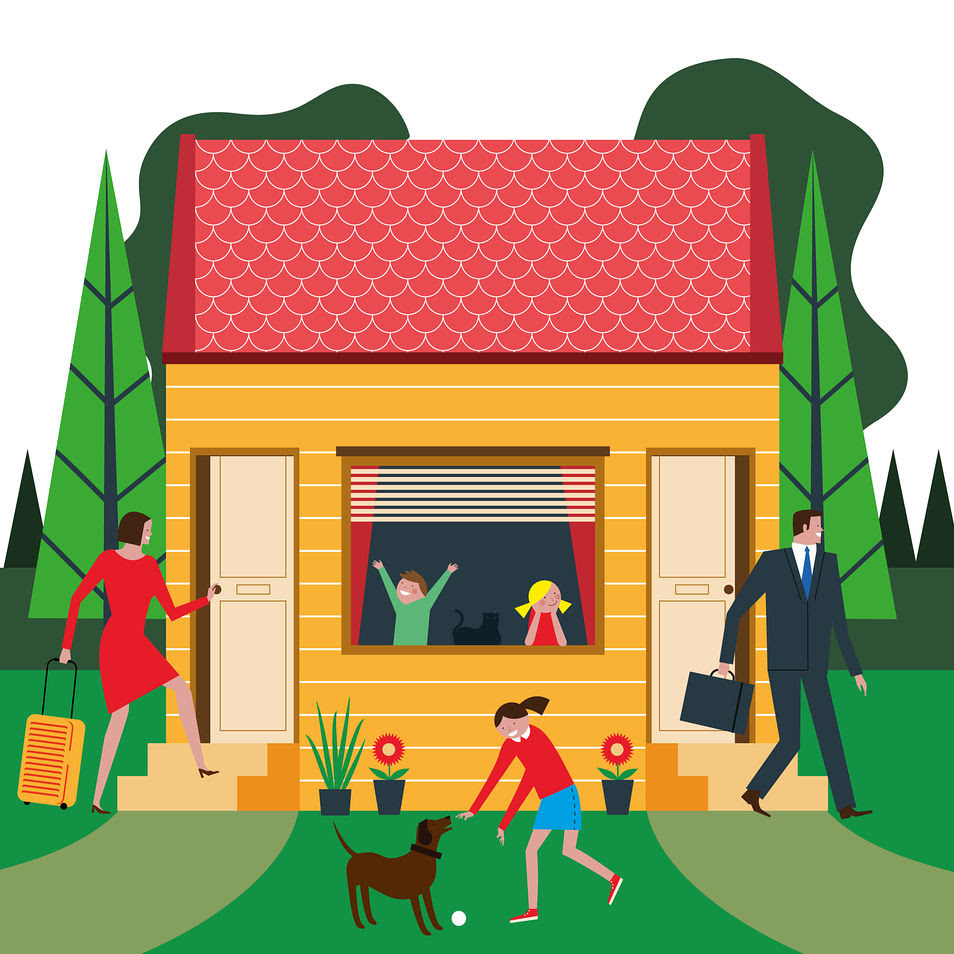 Parents who are divorced shuttle back and forth from the family home when they ‘nest.’ Sometimes they share an apartment or stay with friends or relatives when it is not their turn in the house. ILLUSTRATION: VERÓNICA GRECH FOR THE WALL STREET JOURNAL

Debbie Nigro, co-founder of First Wives World, an online support network and radio talk show host, says that both economics and better parenting are leading people to think of divorce in new ways. She says divorcing people are more creative because women have more earning power, and men are doing more child care.

“Divorced fathers have really stepped up over the last decade,” Ms. Nigro says.

Amy Saunders, a divorce attorney based in Westwood, Mass., says she has seen a marked increase in interest about nesting over the past year. Parents are drawn to the ease of slipping out of their marriage without making hard choices about custody or selling the house.

She says many divorces start out amicably but become contentious once the financial details are ironed out. One partner reneges on their side of the agreement—brings home a girlfriend or leaves dishes in the sink—and nesting falls apart.

“I think it can last a year,” says Ms. Saunders. “After that people can’t handle it. They start doing stuff like going through each others things.”

Ms. Saunders says parents should set strict household rules down to who does the dishes and at what hour handoff occurs. Often it is best for one parent to drop the children at school while the other picks them up so there is no direct contact. There needs to be a fail-safe plan to end the nest. Nesting should never be indefinite.

Psychologists say that children can emerge almost unscathed from even the nastiest divorces if the couple works together as parents. Moving houses, even not seeing a parent for a protracted amount of time can be overcome. Conflict is the only thing that really hurts children.

The intimacy of nesting raises the possibility that children will witness more conflict between their parents than if they had totally separate domiciles. Children may also never really get used to the reality that their parents are divorced.

“When you have a new home, the child knows where you are. They can imagine the rituals and rhythm of your life,” says Ms. Zitner. “With nesting they wonder what is my parent doing without me? How do they live?”

Trish Bittman and her husband decided to divorce a year ago. They wanted to keep their house on Bainbridge Island, Wash., and agreed to share custody of their three children, who were 7, 10 and 12 years old at the time.

She looked everywhere but couldn’t find a three-bedroom rental. Finally, she found a one-bedroom furnished basement apartment on the beach, within walking distance of the family home. They decided to share the rental and nest.

Ms. Bittman, a social media consultant, says she came to like the apartment for its neutrality. It felt like an escape, an Airbnb.

“Leaving the home allowed me to relax and become a single thing,” she says.

She took turns living in the family home, switching off with her husband every week on Tuesdays during school hours. As a courtesy, each was careful to keep both the house and apartment clean.

But the problems that arose during marriage didn’t go away during nesting. The two agreed on parenting but fought over money. Ms. Bittman says.

She also felt that while her 11- and 12-year-old liked being in their childhood rooms, the 7-year-old was sometimes confused over her parents’ status.

“Overall it was a mixed bag,” says Ms. Bittman.

Write to Nina Sovich at nina.sovich@wsj.com

CALL
BOOK A FREE CONSULTATION
EMAIL
TEXT MESSAGE
PrevPrevious9 Signs It’s Time to Get a Divorce
Next7 Signs Your Marriage Won’t Work, According to Divorce LawyersNext
Scroll to Top